SPENCERPORT, N.Y. – The Spencerport Volunteer Firemen’s Association is asking residents to be vigilant after receiving information that solicitation phone calls are being made to citizens asking for money on behalf of the fire department. The Spencerport Volunteer Firemen’s Association does not solicit donations through phone calls and encourages anyone who may have received a phone solicitation to notify authorities.

“We were made aware today that a citizen had received a phone call from an individual seeking monetary donations claiming to be representing the fire department,” said Association President Jason Rampello. “The citizen immediately notified the Firemen’s Association upon becoming suspicious and we have contacted the Ogden Police Department.”

The Spencerport Volunteer Firemen’s Association is a 501(c)(3) not-for-profit charitable organization and adheres to the contribution guidelines set forth by the Internal Revenue Service (IRS). The Firemen’s Association does not solicit donations through phone calls, internet or social media. Further questions may be directed to (585) 352-6115.

Spencerport Fire District has welcomed three new members that are now almost completed with their internal recruit training. We have an extensive in-house training program for our new members that covers all aspects of safety, fire ground operations, and the basic essentials of firefighting.
➜
SFD Firefighters honored at Monroe County Joint Fire Service Recognition Banquet

Assist to Brockport FD for a car into a trash truck with entrapment. Motor vehicle accident for a car that hit a pole on South Union Street.
SFD Spring 2018 Recruit Class 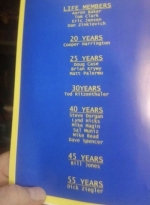 Some SFD Members were recognized for their years of service at the annual fire department banquet.
Motor Vehicle Accident - Colby Street
SFD firefighters responded to Colby Street for a car that lost control and went off the road flipping upside down. The driver had only minor injuries.
October 2017 Recent Calls

In October, SFD responded to a structure fire on Jorpark Circle and a Motor Vehicle Accident with people trapped on Gillett at Route 31.
Vehicle Fire - Nichols Street 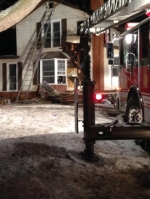 SFD firefighters responded to a Washington Street residence for a reported chimney fire. A working fire was declared when fire was found in the walls around the chimney.
Farm Combine Fire

Spencerport firefighters responded to Gillett Road for a farm combine on fire. The fire brought down utility wires and started a grass fire.
Motorcycle vs Car Accident

SFD responded to Stoney Point Road and Union Street for a car vs. motorcycle crash. The motorcyclist has serious injuries.
Assist to Brockport Spencerport FD responded to Brockport with Ladder 2911 and Pumper 2912 for the working townhouse fire.
Assist to Brockport 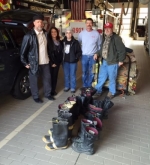 The Spencerport Fire District has donated outdated gear to the Petra Christian Fellowship who in turn donates it to needy volunteer fire departments in the Philippines. If any fire department in the Rochester area would like to donate gear and other fire equipment then please email the church at ww...
➜
Chimney Fire 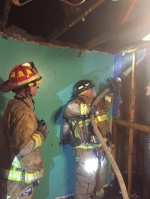 Spencerport volunteer firefighters responded early this morning for a chimney fire on Thistlewood Lane. Once on scene it was discovered that the fire had spread in to the attic area. A good job was done to keep it from spreading to the rest of the house.
➜
1 of 32 of 33 of 3
45 entries in the News
Facebook timeline
Twitter timeline
SpencerportFD
Call volume
2022 total
Fire
409
Spencerport Fire District

This site has been viewed 504,370 times.
News
Apparatus
Maintained by the members and staff of Spencerport Fire District. Designated trademarks and brands are the property of their respective owners. Copyright © 2006-2022. YourFirstDue Inc. All Rights Reserved. Content on this web site is supplied by Spencerport Fire District. YourFirstDue Inc. cannot be held responsible or liable for any content, text, pictures, or any other media found on this web site.
Management login
Powered by